A TRIP TO KARACHI

I was long planning to go to Karachi but there were quite a few obstacles in that. First and most important was to convince my parents to let me go, as a common perception about Karachi’s situation they were not letting me go. Second issue was financial, Bus takes almost a day and then one will need at-least a day to get fresh-up and by air was expensive. Third issue was time; I would need at-least a week off from office.

First issue I resolved by keep asking parent again and again to allow me to go and at-last they did or at-least I assumed they did J. I planned to go by Air and saved some money for that and for holidays I choose the days that have least work load, which is December.

Then came the day of 14th December, Plan was scheduled to leave at 3AM, Nafees and father dropped me at airport around 1:30 AM. I boarded and came to know that plan is an hour late. Finally the journey started at around 4 AM, flight was quite pleasant and short, in around 2 hours I reached Jinnah Internal airport Karachi. It was 7 in the morning, in 30 minutes I was out- side airport. 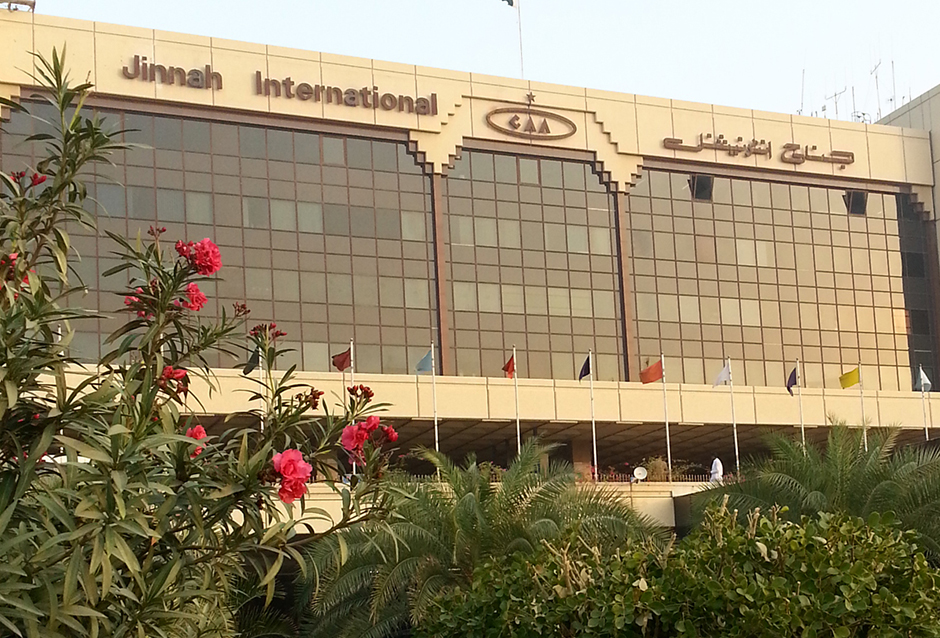 My Cousin lived in Gizri, Karachi so I started to look for taxi, At airport there were taxis in line and I inquired about the fare for Gizri, Taxi guy was Pathan, he told me 600 PKR, I thought its quite steep so asked others but everybody told me the same so I took a taxi and reached Gizri in around 30 minutes, my cousin has a construction material shop in Gizri and takes off after Friday prayer. It was a Friday today so I got freshen up, talked for a while and met some people from neighborhood.

Offered Friday prayer at the mosque near-by and then we started to explore Karachi with my cousin. First we took a Rakshaw to Mazar of Shah Abul Latif Bihtai. After prayers and some walking around we left it. It’s close to Clifton Karachi, so from there we walked for around 15 minutes to reach Clifton.

Left our shoes with a shoe keeper and started walking on sand bear foot. It was very please feeling, a light breeze was blowing and water sound, it was truly amazing. We walked there for an hour or so and then get back to the shoe guy, gave him 40 Rs for pair of shoes, he gave us a “Dabba” full of water, there was a bench that you see in picture below, we  washed our feet there and left from there. 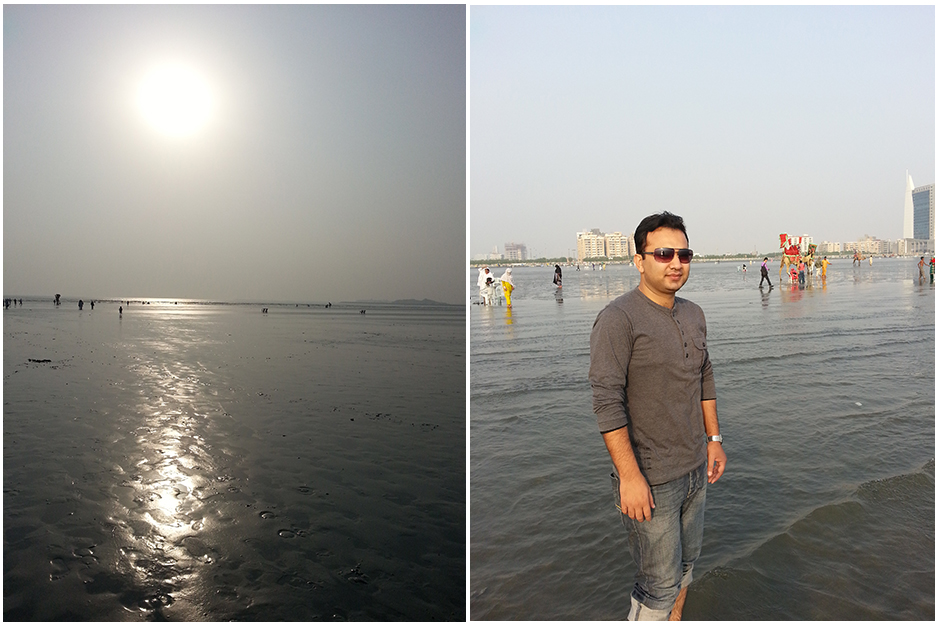 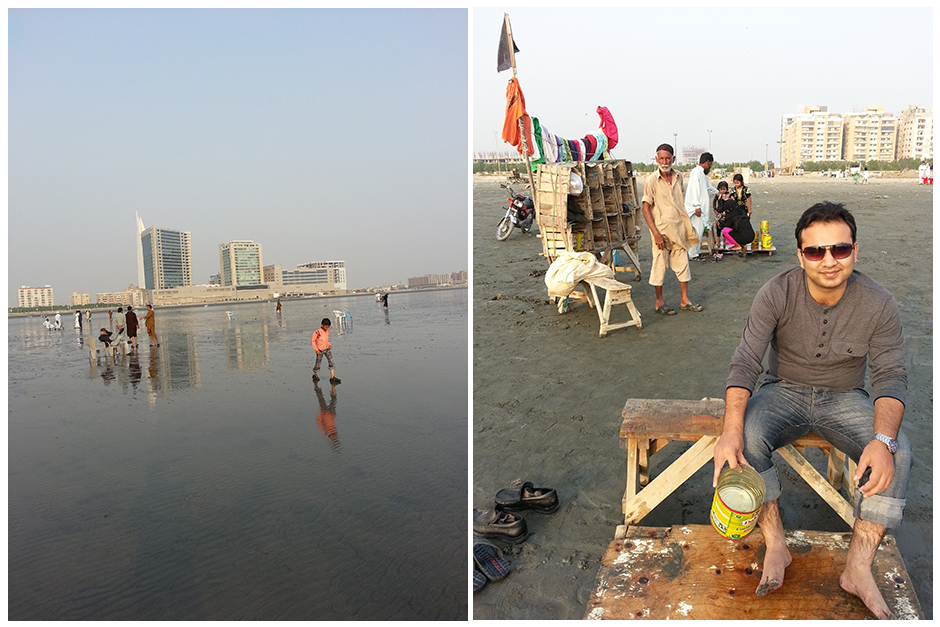 Cousin told me that Sea View is close to this place, so we took rakshaw again and left for it, it only tookd us 5-8 minutes to reach there. We offerd  Asar prayer there in nearby mosque and then to went sea view. 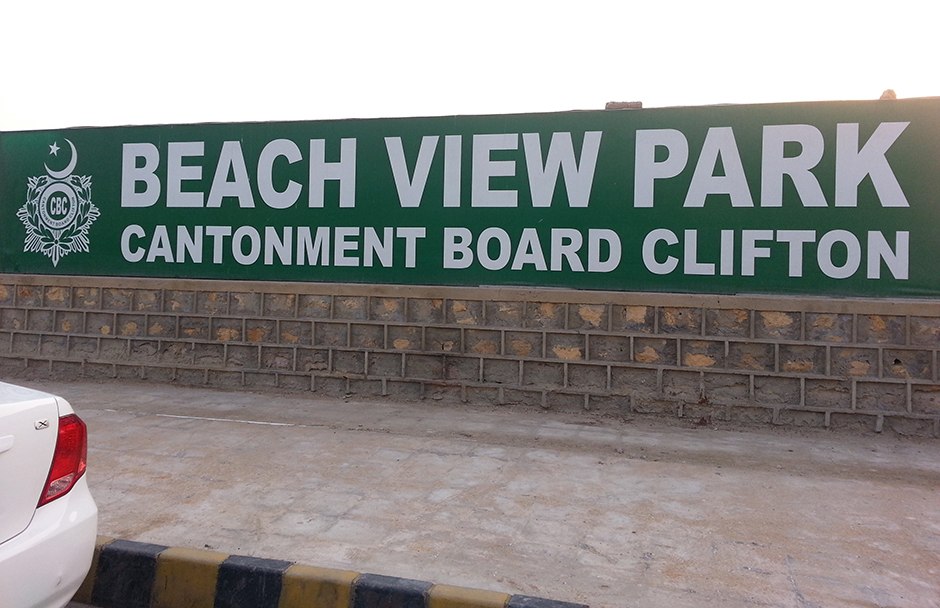 There was lot of people here then Clifton and other activity. Lot of Sand cars (not sure what to call them) were there that gave you rides on beach for some fee. There were people playing Kabbadi and some Vali bal. We witnessed sunset there and it was very pleasant to eyes to watch. We stayed there till the sun set and then left for home.

We had lunch around 9 PM, I took my laptop and Wateen device from Islamabad and it worked perfectly there. I browsed internet for a while and then slept.

On the next morning after getting my breakfast, it was not time to explore more of Karachi. Cousin got me a Car booked for the day; I was reluctant to drive so asked a driver friend to come along. His name was Nazir and was a very jolly guy. We got informed that there was a “Hartal” by a political party, it was very heart breaking as in Karachi normally in these situations you can’t travel, Nazir told me that we should go to Hoxbay “A beach at outskirts of Karachi” as for that we will not have to go troubled area. It was a relief to hear that and I agreed.

I have been watching sports since my child-hood and I am very fond of visiting sports ground whenever I get a chance. They told me that Hockey Stadium is close to Gizri so we went straight there, it was more of a wedding hall now but was still there, took some pictures and then we left for Hoxbay. 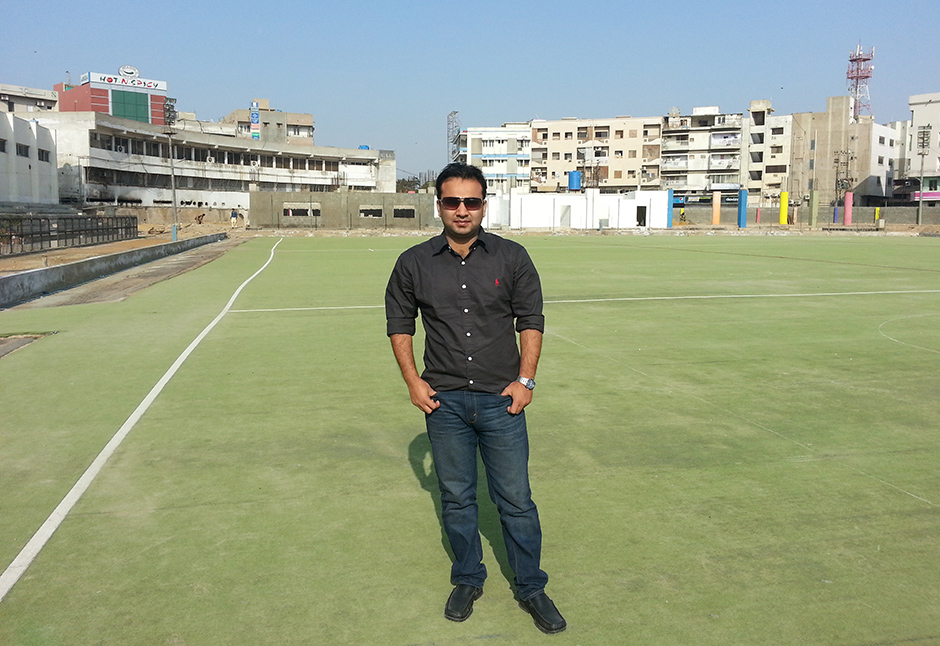 Road to hoxbay when we started out of Karachi was very very pleasant. One should really go there if he is into Karachi, On Way comes different huts, there water is very clean, unlike Clifton beach which is not, and very calm, not many people, actually none were there, one should stay a night in those huts, I am sure it should awesome at night with sound of water touching the rocks and hut walls. After spending some time there we moved forward to Hoxbay. 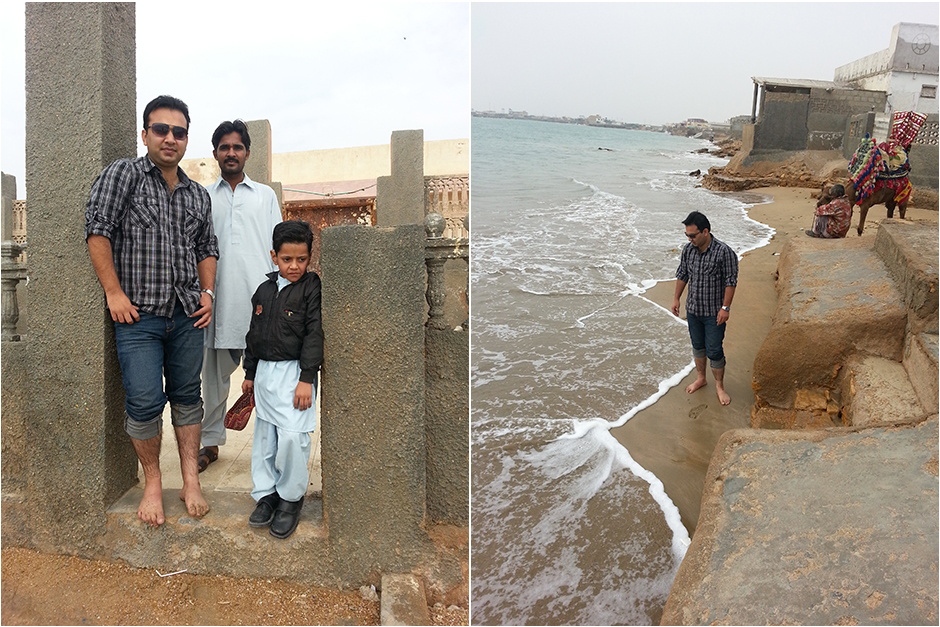 From there it took 30 minutes to reach Hoxbay, it was again an amazing place, it was a point so some student buses were there too along with other people. Strong wind was blowing as expected and water thrashing with the rocks at sea-shore, it was all very pleasant. I loved this area of Karachi the most. 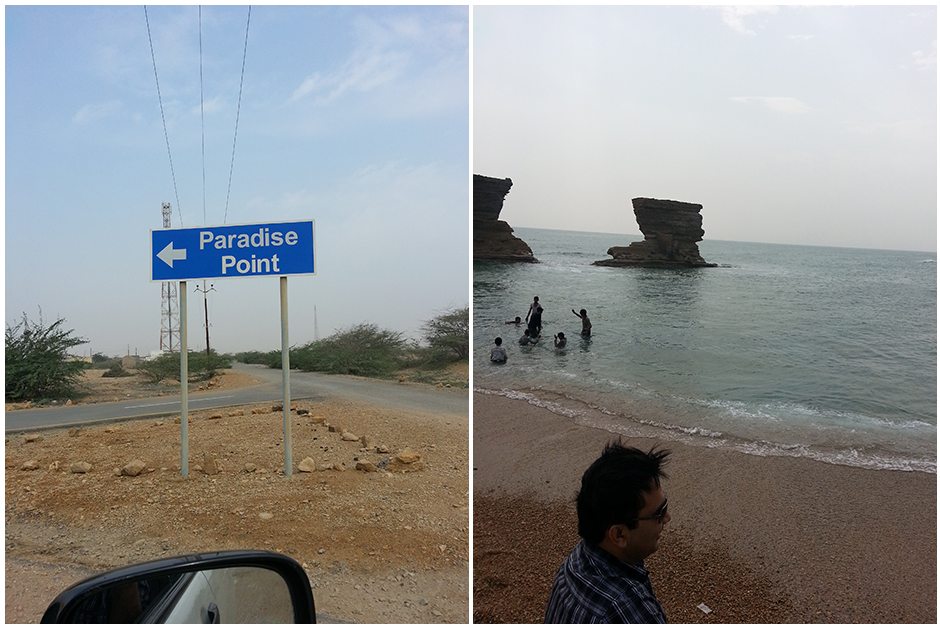 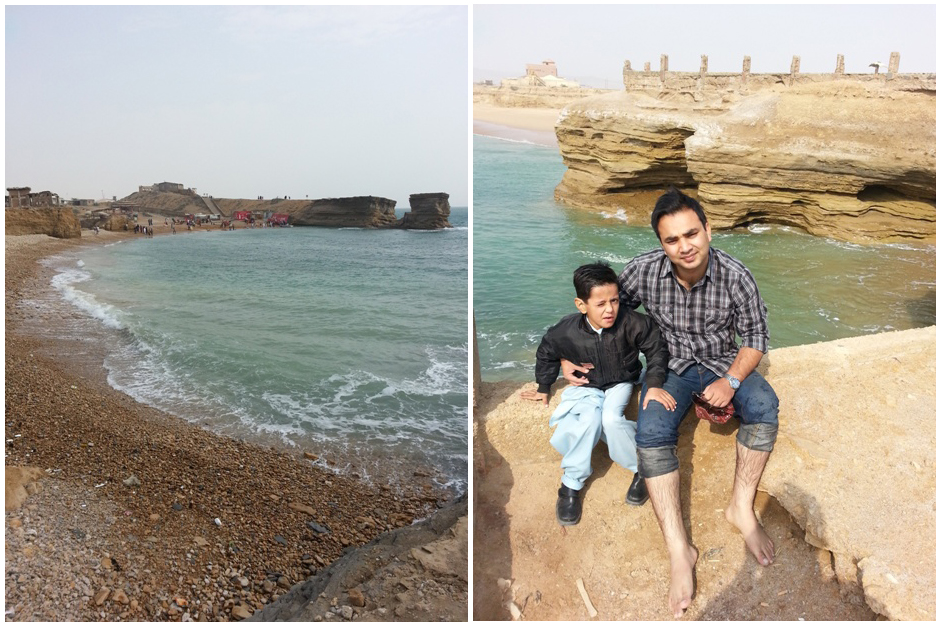 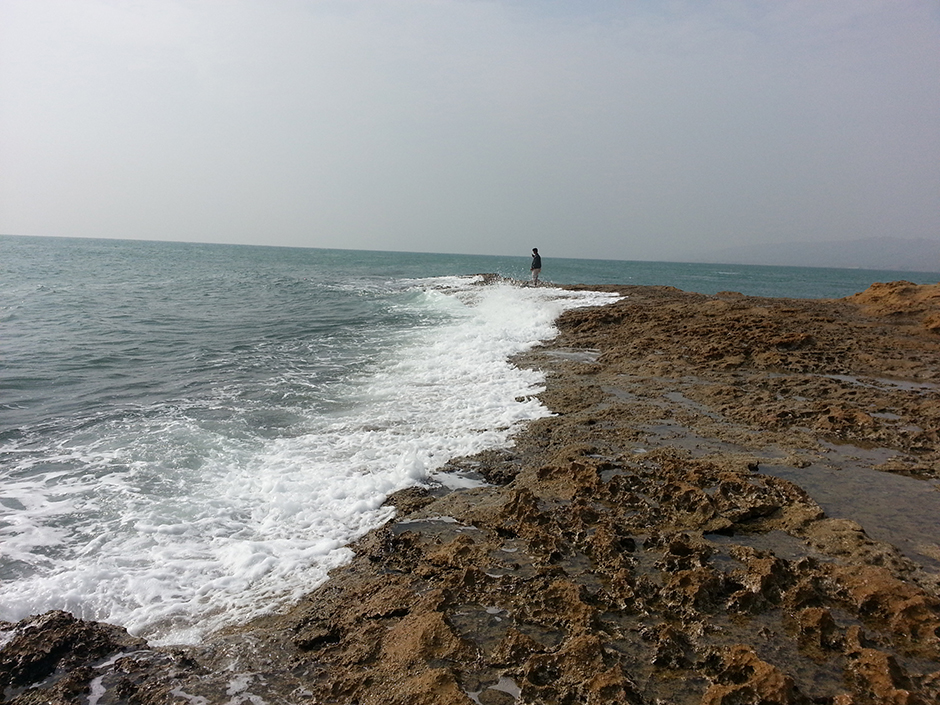 For 2 hours we stayed there, took pictures and then we left for home. At around 4 PM I was back to home, wondered around the close areas of Gizri for some time. Tonight I and Cousin were invited by our neighbors on dinner. A very tasty dinner was served along with Kehwa at end, a very pasthoon dinner and I liked it very much. 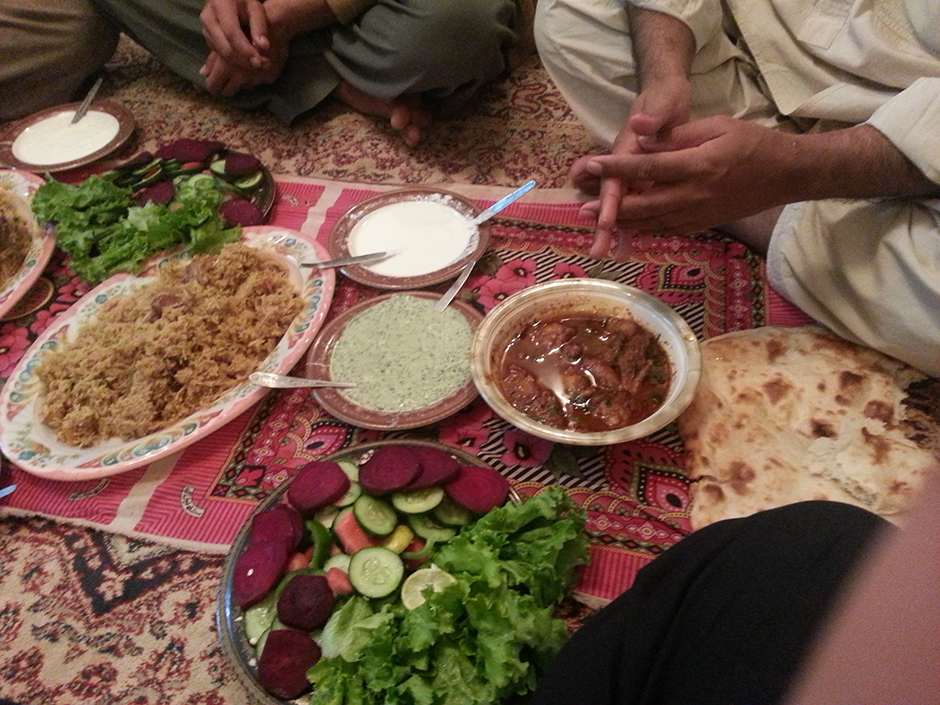 On the next morning, we planned to visit the inside of Karachi city. Again we booked the same car and Nazir was with us.

First stop was Karachi Zoo. Got into zoo after parking and got the ticket. I have been in Islamabad zoo and to my disappointment Karachi zoo was looking the same, but as we kept walking, we saw lots more animals and variety of them J Karachi zoo is quite big, I think it took us at least 2 hours to fully visit it. They ask for tickets again inside to see some items like snakes room, Elephants room which I think didn’t make any sense. 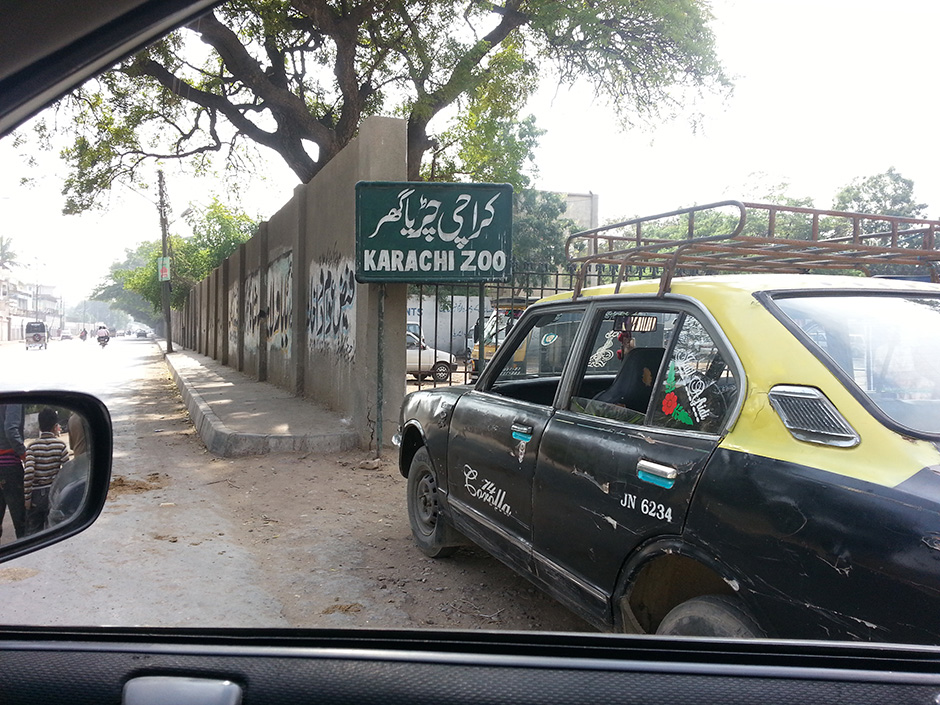 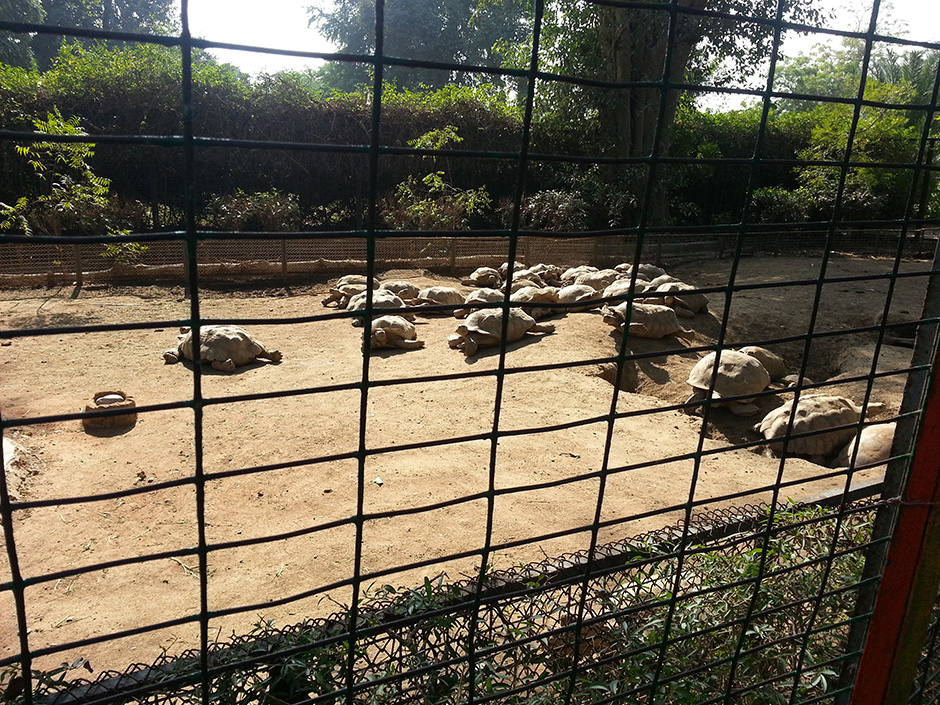 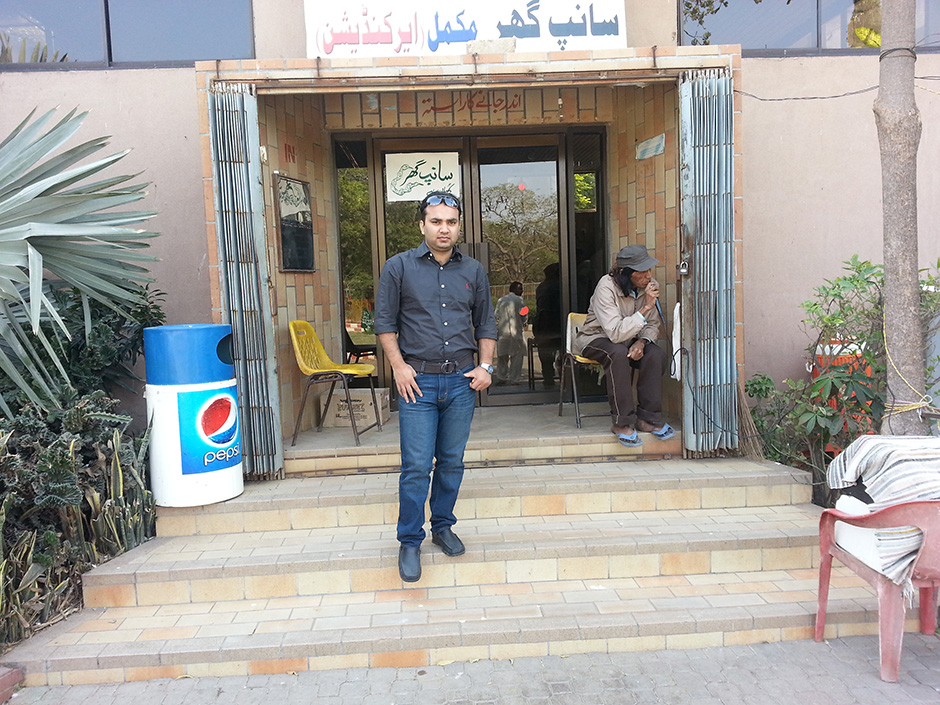 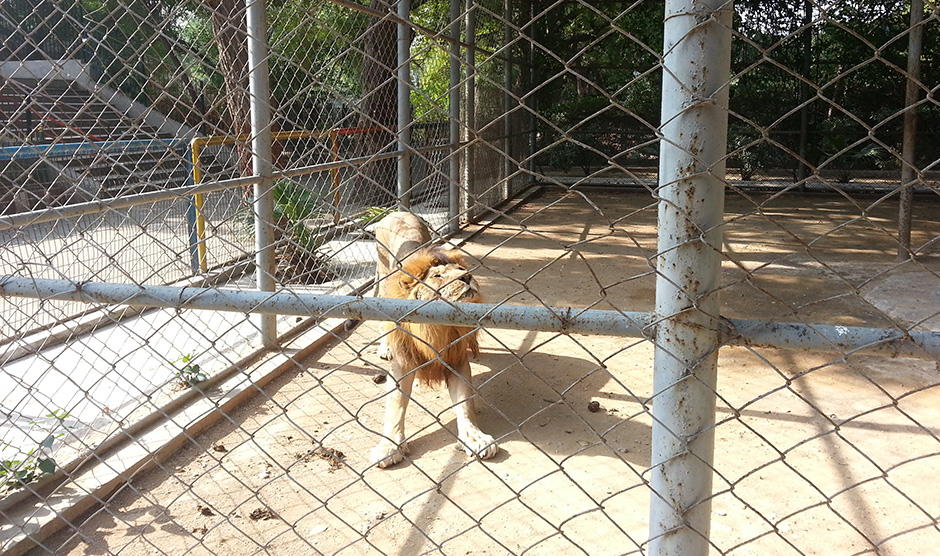 After Zoo we head out to tomb of our beloved Quaid-e-Azam. I don’t know if some of you feel the same but to visit a place that you have been seeing since you child hood gives a very pleasant feeling, Mizar is covering a lot of area, there was parking ticket that we paid and then walked towards the tomb. I am not sure if it was those days or normal practice but during my stay in Karachi, there was always some wind blowing. We offered Fatiha for Quaid, took some pictures and then went to see the Museum with items in display that have been in use of Quaid. Museum is not very big but its full of very elegant items. Pictures were not allowed in there, so viewed different items and then took off as there were still lots to see. 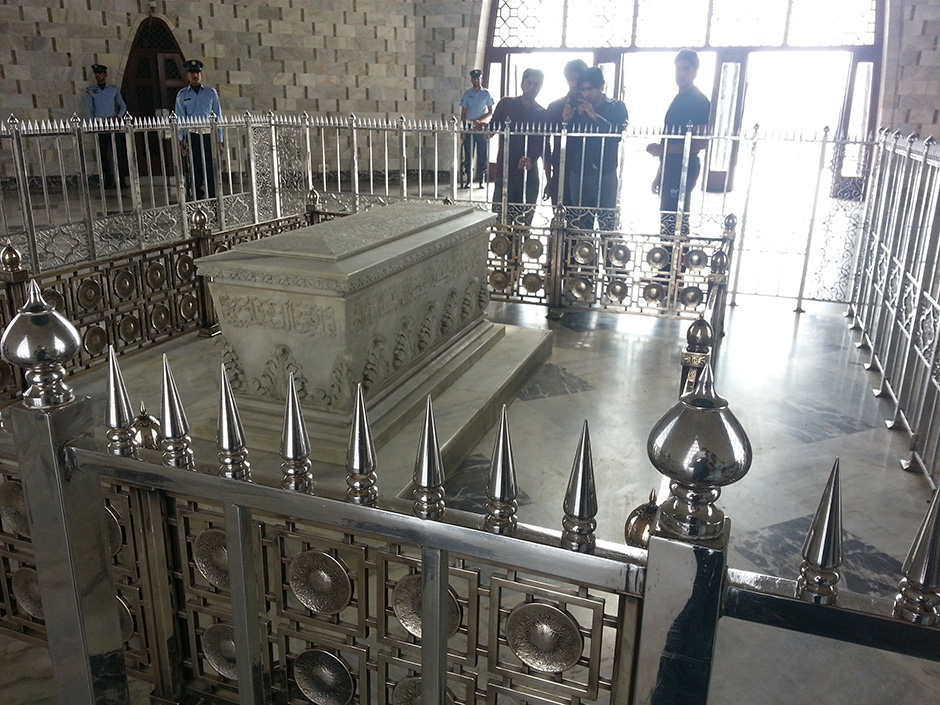 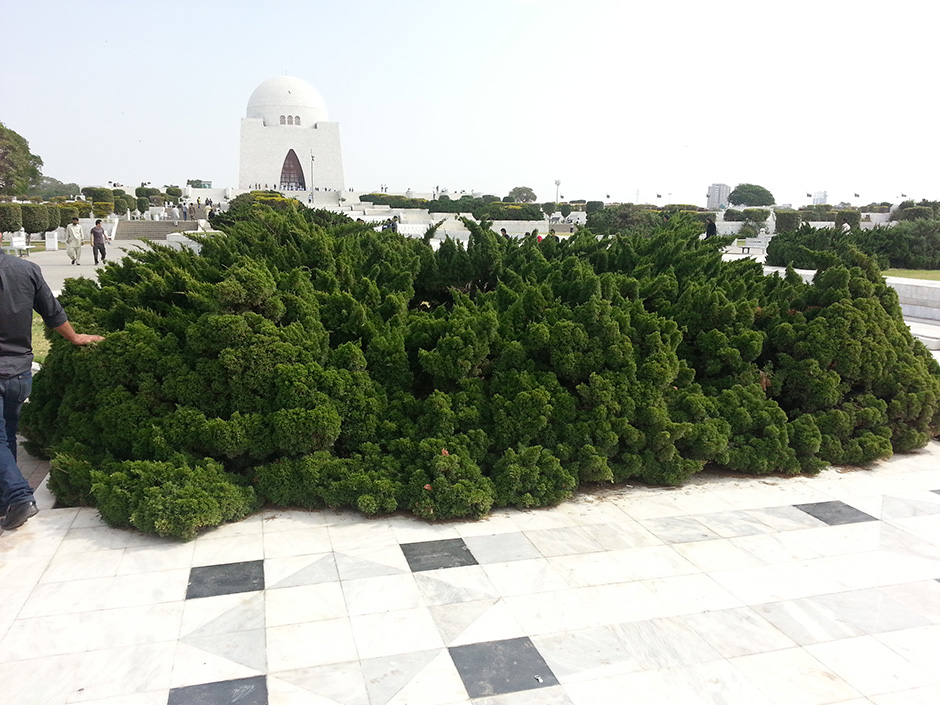 After tomb we went to see different parks in Karachi, most of them were family parks so couldn’t go there, went to one of the park, I don’t remember the name now but not many people were there. I was really excited to see Karachi Cricket ground, my hosts were a bit shocked as to why but Its been my hobby. They took me there and we did some walk around, took some pictures, doors were locked and no match was being played so were not able to reach in-side though. 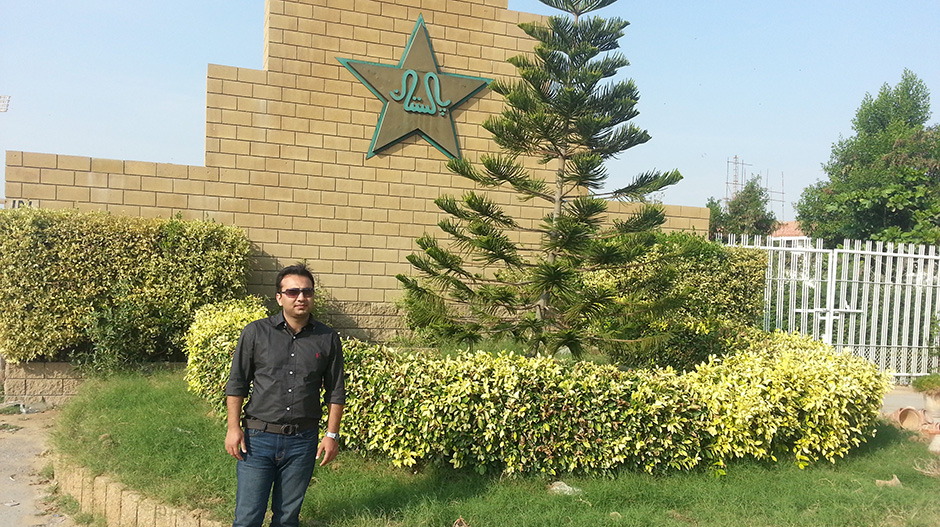 From there we left for home, then with cousin went to do some shopping and then took our dinner from a hotel called 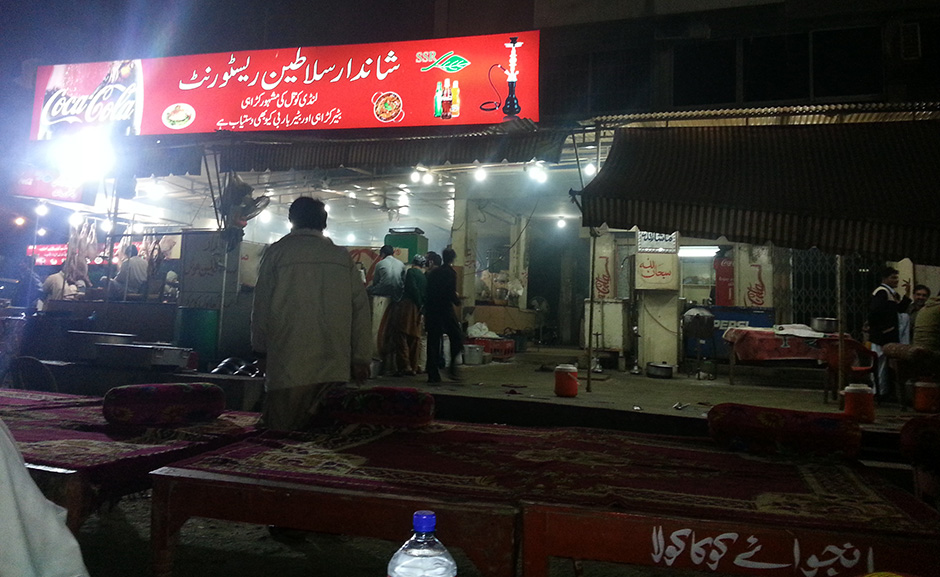 On Next day I had to go to visit a close friend of mine who lives in Nazim-a-bad, We decided to meet at 1 PM, I took a taxi at 12 PM but there was lot of traffic and I got bit late. On the way taxi driver told me not to use my cell phone specially on signals. I put my cell and wallet on right side of seat, I reached at Dollman mall around 1:15 PM, me and friend went to lunch at Largess near dolman mall, when we got out I certainly realized that I don’t have my wallet, I was shocked but I had my cell phone, I called my cousin in Gizri from where we got our taxi and told him about this, He talked to some of taxi drivers there and thankfully got his number, we called that taxi driver and he was honest enough to return it to us! You can see him in the picture below.

Next day was 18th and it was the day I had to come back. My flight was a 2 PM, They dropped me at 12 PM and then as always I was told that flight is late for 2 hours. Our plan left Karachi airport at 4 PM and I reached Islamabad airport at 6 PM.  My brother Anis was there to pick me up and we left for home with the pleasant memories of Karachi with me.

I have to say I have liked it very much; In future I am sure I will go to Karachi more and more, I really loved Karachi and beach specially.  I will do it again hopefully soon and on car this time.