Kurram Agency takes its name from the river Kurram which passes through it. The headquarters of the agency is located at Parachinar. The agency lies between 330-20¢ to 340-03¢ north latitudes and 690-50¢ to 700-45¢ east longitudes. The Agency is bounded on the north and west by Afghanistan (the provinces of Ningarhar and Pukthia respectively), on the east by Orakzai and Khyber Agencies, on the southeast by Hangu and on the south by North Waziristan Agency. The agency is 115 kilometers long with a total area of 3,380 square kilometers. The population according to the 1998 census was 448,310. 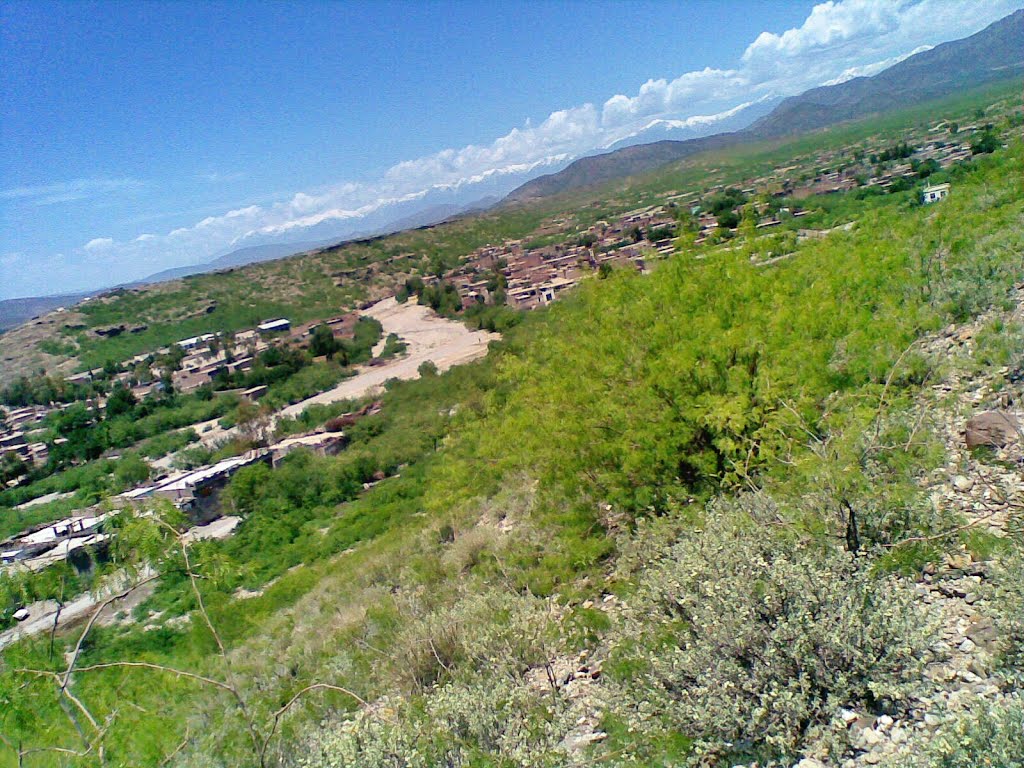 It lies between the Miranzai Valley and the Afghan border, and is inhabited by the Pashtun Turis, a tribe of Turki and Pathan origin on the western and central side who are supposed to have subjugated the Bangash Pashtun about six hundred years ago. The language of the tribe is Pashto, but unlike majority of the Pashtuns they are Shias. Eastern portion of the valley is now inhabited mostly by Sunni Pashtuns mostly Mangals, Paras and the remnants of the Bangash. 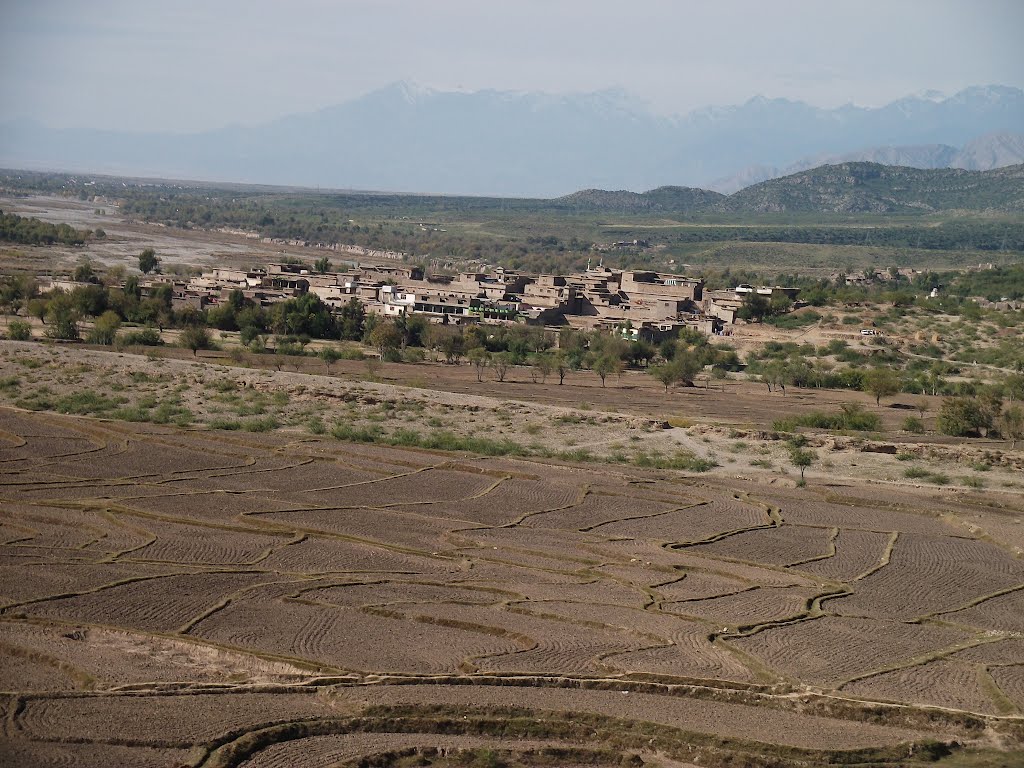 The principal mountain range in the agency is the Koh-e-Safaid or Spinghar with highest peak of Sikaram Sar 4,728 meters height which forms a natural boundary and water shed with Afghanistan. It remains covered with snow through out the years. South of the Peiwar Kotal the hills of the Mandher range rise gradually till they drop the south–west corner of the plateau at Kharlachi, the point where Kurram River enters the valley.

A part from the high mountains, the other important feature is the Kurram valley. The valley starts from Thall in Hangu district towards northwest upto Peiwar Kotal on Pak Afghan border. It can be divided into two parts i.e. the Lower Kurram and the Upper Kurram. The Lower Kurram extends from Thall in Hangu district to Sadda. It is narrow and hedged by low hills on either side of the Kurram River. After that the valley opens up into the Parachinar plateau which is a large oval shape plain sloping towards southeast. The Upper Kurram valley from Sadda to Peiwar Kotal is bounded by high mountain on all side. The Kurram River enters the agency in the west near Kharlachi from Afghanistan and runs in northwest to southeast direction and leaves the agency at Thall in the southeastern corner of the agency. Several hill torrents and Nullahs join Kurram River.

The Agency is divided into three sub-divisions

Political Agents as the head, the agency is divided into three sub-divisions i.e. Upper Kurram, Lower Kurram and Central Kurram each headed by an Assistant Political Agent. The former two sub-divisions have long been administrated and record exist for most of the farmed area in these two sub-divisions, although settlement has not been carried out since the 1940s Central Kurram, however, remained inaccessible terrain till today. It remains the least tractable of the three sub-divisions. Its level of development lags substantially behind that of the other two sub-divisions but efforts are being made to bring it at par with the other area. Upper and Lower Kurram, being administered areas, are controlled directly by taking cognizance of all offence which are dealt with under the Frontier Crimes Regulation, Kohat pact and customary law (Turizuna). The Administration in the Central however, is indirect, through the tribal elders.

History
The area, which forms the present day Kurram Agency, was a part of Afghanistan before the second Afghan War, 1878-79. The local Turi population continuously resisted and resented the Afghan domination.

During the second Afghan war they assisted Lord Roberts and were thus liberated from the Afghan control. Due to internal strifs, intrigue and also British manipulation, they failed to establish satisfactory self-government.  In 1892, British intervened on the request of the Turi tribes and brought the area under British rules. Later on the people of Kurram valley took part in the liberation movement of India so when India was liberated from British rule this area became a part of Pakistan.

• The Kurram expedition of 1856 under Brigadier-General Sir Neville Chamberlain. The Turis on the first annexation of the Kohat district by the British had given much trouble. They had repeatedly leagued with other tribes to harry the Miranzai valley, harbouring fugitives, encouraging resistance, and frequently attacking Bangash and Khattak villages in the Kohat district. Accordingly, in 1856 a British force of 4,896 troops traversed their country, and the tribe entered into engagements for future good conduct.

• The Kohat-Kurram expedition of 5,897 under Colonel W. Hill. During the frontier risings of 1897 the inhabitants of the Kurram valley, chiefly the Massozai section of the Orakzais, were infected by the general excitement, and attacked the British camp at Sadda and other posts. A force of 14,230 British troops traversed the country, and the tribesmen were severely punished. In Lord Curzon’s reorganization of the frontier in 1900-1901, the British troops were withdrawn from the forts in the Kurram Valley, and were replaced by the Kurram militia, reorganized in two battalions, and chiefly drawn from the Turi tribe.

The population of Kurram valley consists of a number of tribes namely Turi, Bangash, Parachamkani, Massozai, Alisherzai, Zaimusht, Mangal, Kharotai, Ghalgi, Hazara. Turi are in majority followed by Bangash and others.

The most economic mineral in the agency is soapstone. The area of mineralization of soapstone lies in the eastern extreme of Koh-e-Safaid and makes the upper parts of Daradar valley. The soapstone associated with the dolomite is an important mineral commodity of the area. It may also be pointed that the dolomitic limestone formation is recrystallized and also embodies lithological variation; there is every chance of having marble and industrially feasible dolomitic deposite. Some marbalized horizone have been noted around Zuhra and Gandao area.

The Kurram River takes its origin in the junction of a number of small streams at no great distance above Kharlachi. From Kharlachi its junction with Kirman 19 kilometers down stream, it receives no further supply except from occasional float torents from Koh-e-Safaid, though an innumberalbe series of ravines cut into the plateau. For another 26 kilometers the only contribution to the river is rain drainage from the hills, but at Sadda it receives Khurmana. Beyond village Tangi (Lower Kurram) it receives no further supply within the agency and crosses over to Thall from where it enters into North Waziristan.

The climate conditions everywhere are generally favourable. In January and February discomfort is experienced from snow, rain and chilli weather and sometime fogy, while from the middle of June to the middle of August, the temperature is moderate. For the rest of the year the climate is in every way excellent, and indeed its admirers call it ideal.

Generally, people are not literate and earn living by farming as tenants on land owned by others. However, surprisingly a significant number of locals are residing and working abroad and have brought prosperity to the area.

Maulana dam is a small dam in Safed Koh north of Parachinar city. It is close to Maulana village and is famous for its scenic beauty.

Zeran dam is located on north east of Prachinar. It is also famous for its scenic beauty.

This dam is located in village Malikhel Parachinar. It is a very big dam and contains 70,000 fishes. This dam gives water to about 2500 km² area.

Parachinar is the political head quarter of Kurram valley. It has offices of political agent, levy, and Kurram Militia, part of Frontier core (FC). It is located on the western and northern side of the valley. This makes it a part of Upper Kurram. The name of Parachinar comes from ‘Para’, one of the tribes of the valley and ‘Chinar’, the maple trees which are found in abundance in Kurram value in general and Parachinar in particular. The town of Parachinar has population around thirty thousand with Turi majority. The town has government hospital and many government schools.

Sadda has grown enormously during the past ten years due to the concentration of refugees in its neighborhood. It is big trade market for the people of Lower Kurram and Central Kurram.

Dogar is a big village in the Central Kurram. It is an important market for local made arms.