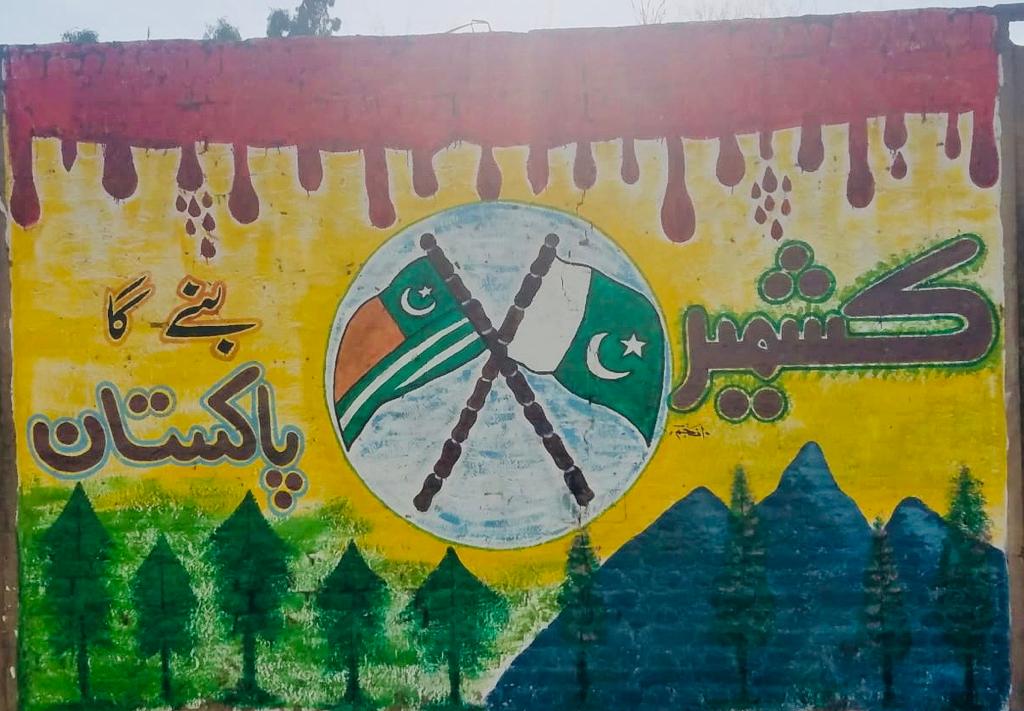 31. “KASHMIR BANYGA PAKISTAN”
Kashmir is the most sensitive issue for the Islamic Republic of Pakistan. It is considered as a lifeline for Pakistan in many terms such as geographical, water resources, etc. Indian occupied Kashmir is also part of Azad Kashmir which functions as a separate state. As a symbolic elder brother, Pakistan helps Him to function as a successful state however, in Indian occupied Kashmir, people are suffering a lot for day to day life. People of Kashmir dreams to merge their valley with Pakistan so they will be able to live peacefully and with freedom. In contemporary wall painting, Kashmir-Pakistan’s brotherhood is been presented however, the bleeding wall of Kashmir reflects the cruel face of Indian occupied Kashmir.

32. “SHUHADA E PINDSULTANI”
Soldiers are the assets of any nation. In the contemporary wall painting, tribute is been given to martyrs of Pindsultani. People of Pindsultani are associated with the armed forces of Pakistan. They have served and sacrifices their lives for the motherland. Shuhadas of Pindsultani along with their ranks and names are been introduced on this wall painting. 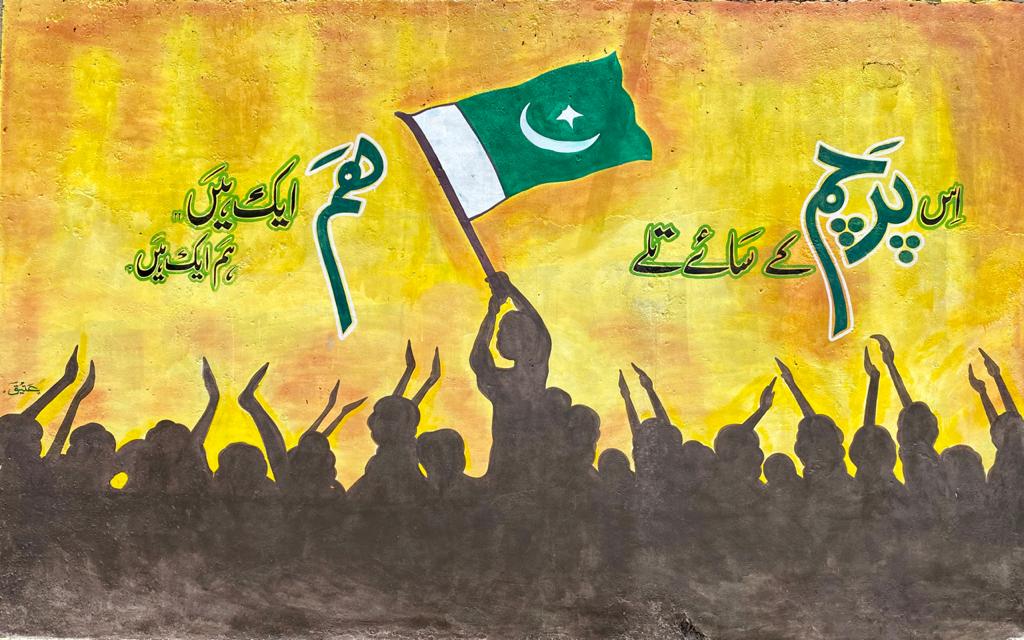 33. “IS PARCHAM KY SAAY TALY HUM AIK HAIN”
Pakistan is the land of multiculturalism and ethnicity, where people from different communities live together unanimously. In the current wall mural, the message of unity is been given. “Individually, we are one drop. Together, we are an ocean (Ryunosuke Satoro). 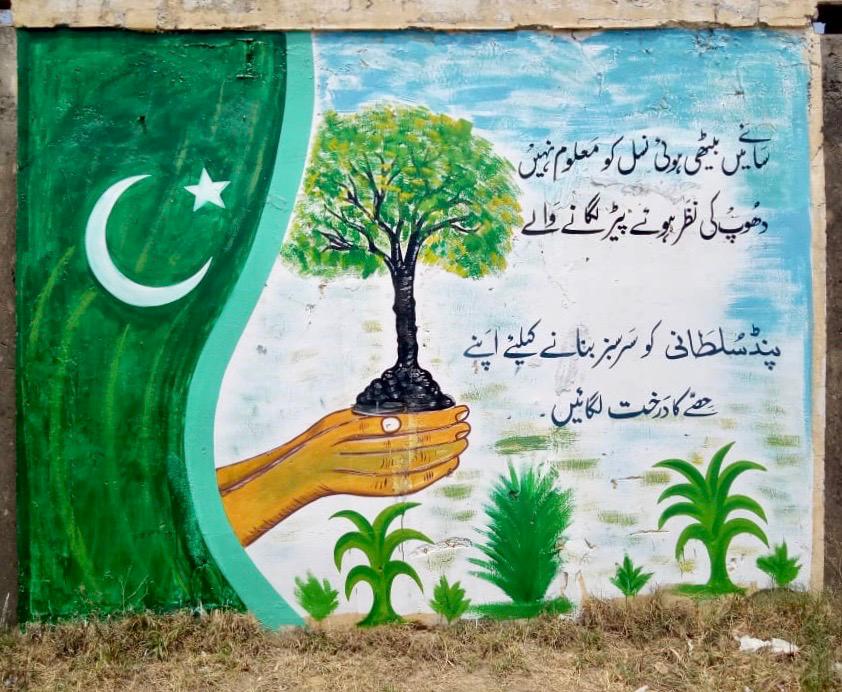 34. “PINDSULTANI KO SARSABZ BNANY KELIYAI APNY HISSY KA DARAKHT LAGAYN”
“Someone is sitting in the shade today because someone planted a tree a long time ago”, (Warren Buffett). In the contemporary wall mural, there is a strong and in-depth message of kindness and social responsibility. Tree plantation is one of the greatest gifts one can ever give to the future generation. Therefore, people of the Pindsultani village are requested to play their part of tree plantation for their better and healthy future. 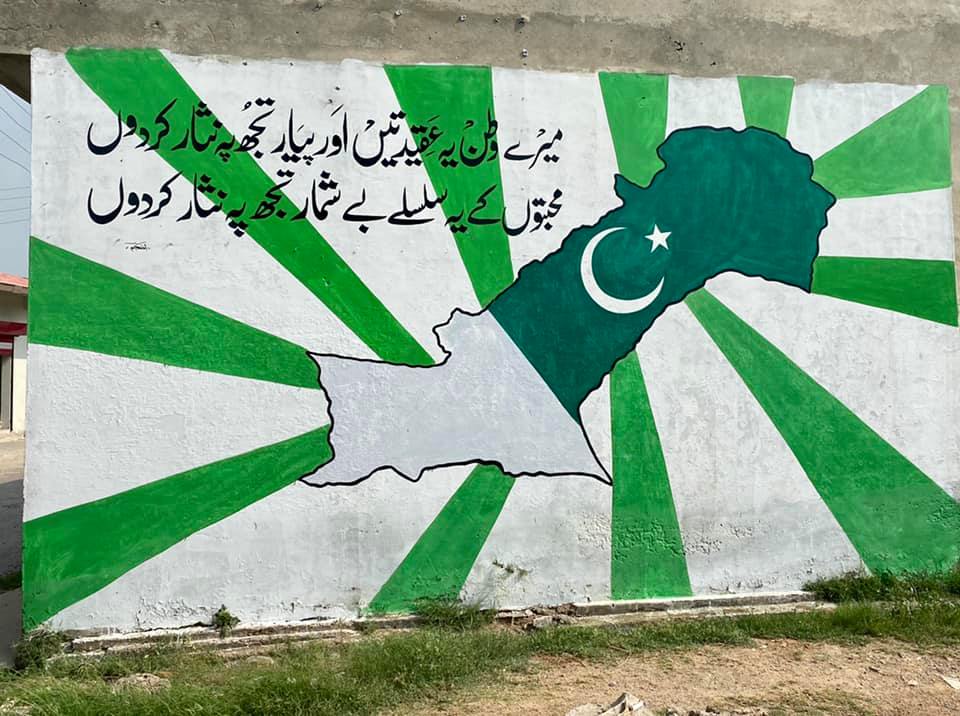 35. “MERY WATAN YAI AQEEDATAIN AUR PYAR TUJH PY NISAR KRDON”
In the current wall art, the map of Pakistan is been portrayed that is shining along with his complete brightness on the sky of the world which is also a symbol of progress and a successful country. 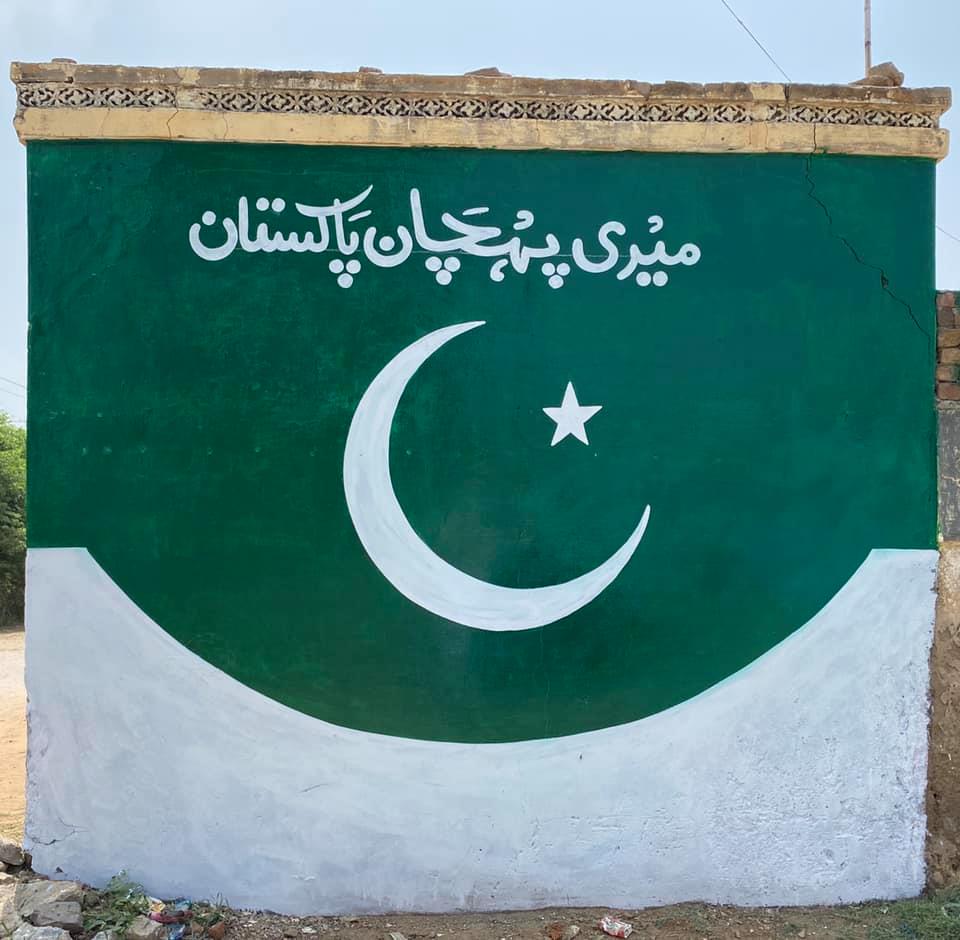 36. “MERI PEHCHAN PAKISTAN”
For a person, it is important to have an identity of his country. People of Pakistan feel proud to be known and called as a Pakistani. In the contemporary wall painting, the flag of Pakistan is portrayed along with his all shine and brightness. Moreover, love for the country and pride to have the identity of Pakistan is also been depicted in this oil painting. 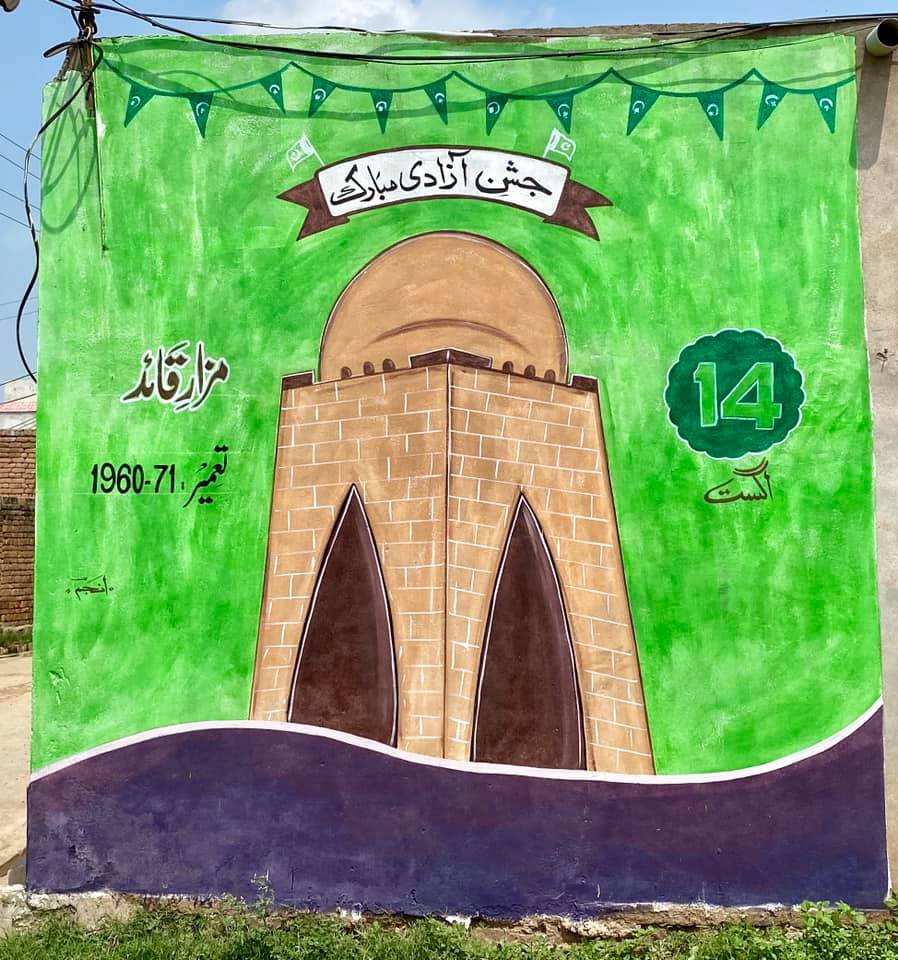 37. “MIZAR-E-QAID”
Founding father of Pakistan, Mr. Muhammad Ali Jinnah who is also known as Qaid-e-Azam (The great leader) died right after the very 1st birthday of Pakistan. Pakistan had lost His greatest leader, Mr. Qaid-e-Azam on 11th September 1948. The tomb of Qaid-e-Azam was constructed from 1960-71 in Karachi that was also known as the first capital of Pakistan. In the current wall art that is painted on the street of Pindsultani village, the tomb of Qaid-e-Azam is been painted along with the date of its construction moreover, symbols of Pakistani flags are presented. Also, wishes for the independence of Pakistan along with the date of freedom can be seen in this painting. 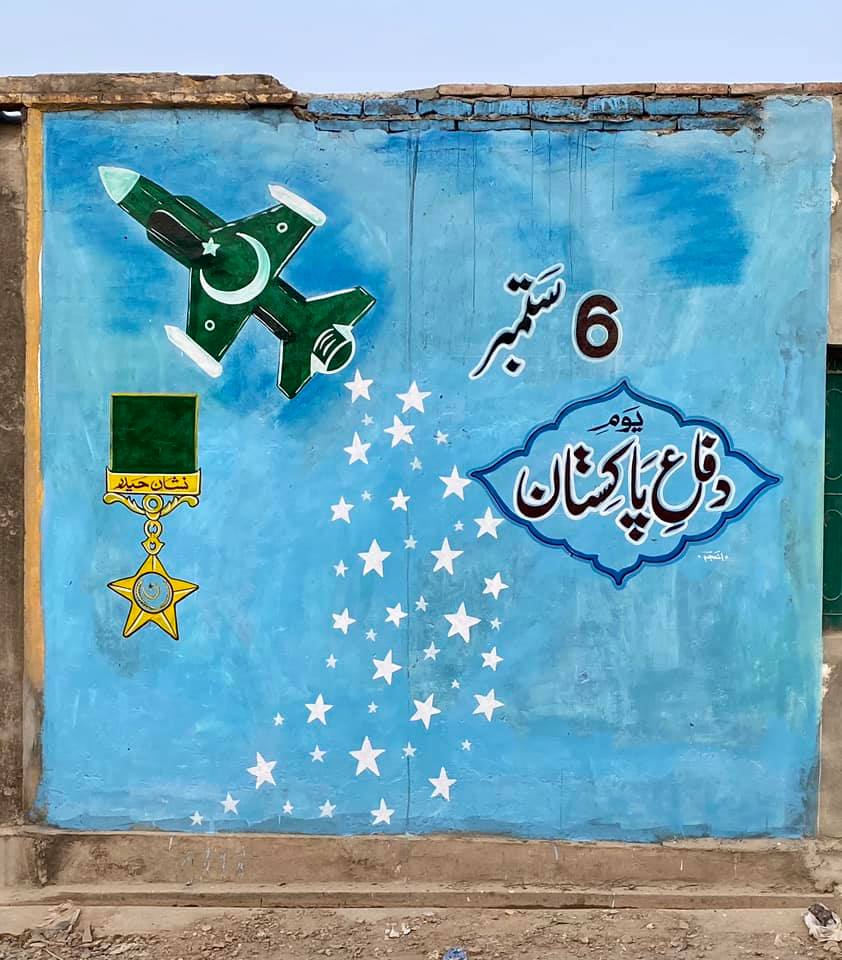 38. “YOME DIFAA-E-PAKISTAN”
6th September 1965, is one of the unforgettable and great events in the history of Pakistan. On that date, India attacked Pakistan from different borders to get control over Pakistani areas, however, in the defense of Pakistan, sons of soil had fought back and got success in that historic war where Indian soldiers ultimately drove to the borders and had not had any option except to leave Pakistani area. In the current wall painting, 6th September as defense day of Pakistan is been portrayed. National armed force award of “Nishan-e-Haider (symbol of the lion) for bravery is also been painted in this wall art. 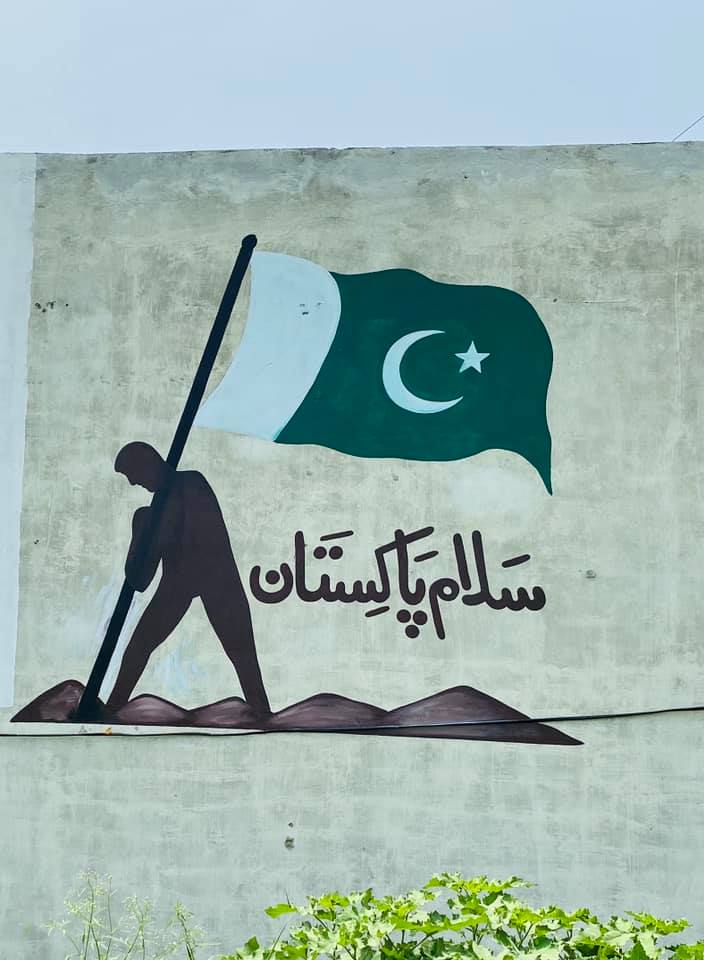 39. “SALAM PAKISTAN”
To be a strong country it is important for one, to have patriotism in the blood of his nation. In the contemporary wall mural, a story of a person can be witnessed who is consistently trying to protect the flag of Pakistan from threats and challenges that the country is facing. Moreover, he is saying thanks and praising Pakistan to give him the freedom and peaceful life. 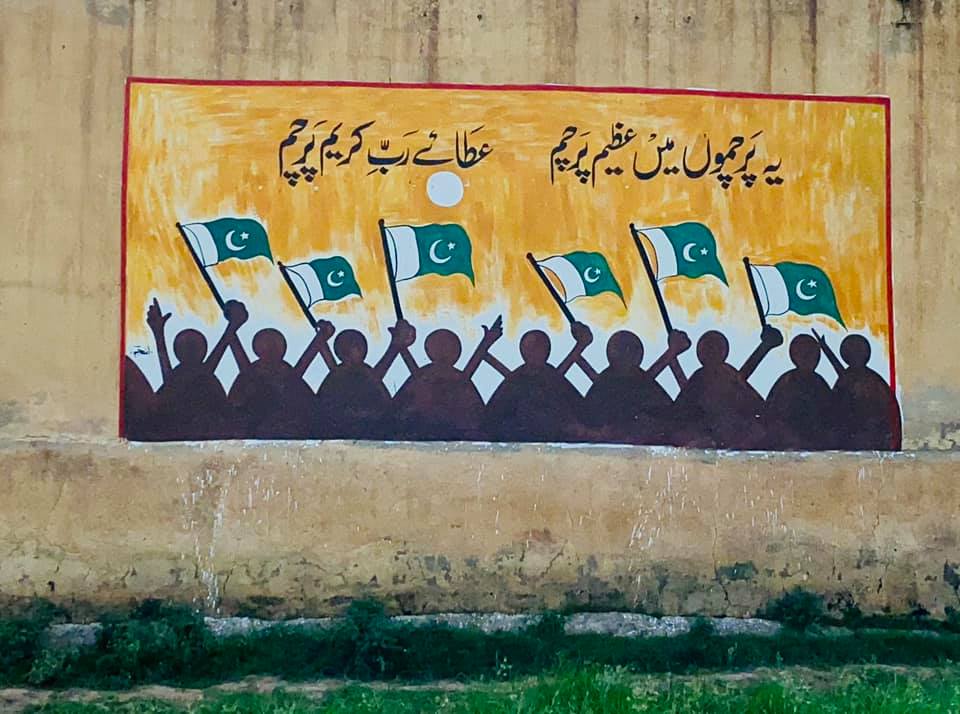 40. “YAI PARCHAMONMAIN AZEEM PARCHAM”
Pakistan is one of the few countries in the world where the national flag has central consideration. In the current wall painting, love for beloved Pakistan can be seen. Moreover, the famous national song is been painted in this painting where the poet is not only praising the national flag also thanking the Almighty for this great blessing in the form of Pakistan. 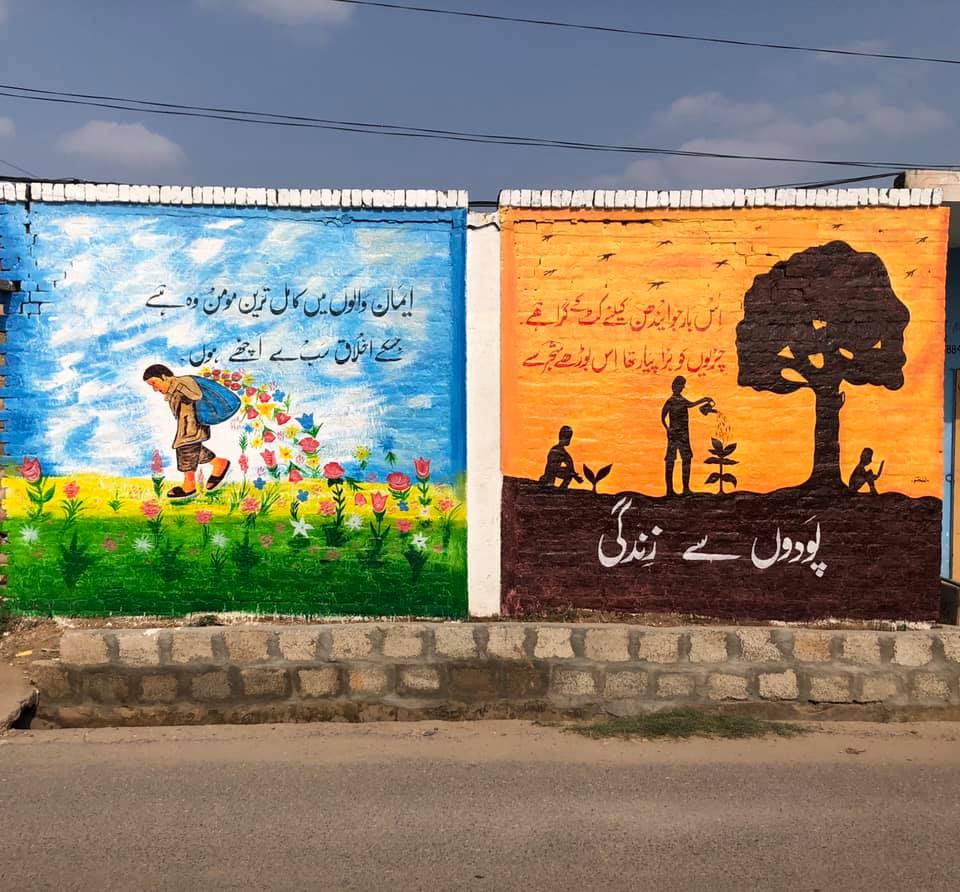 41. “PODON SY ZINDAGI”
Plants are a symbol of love and life. The importance of plantation for humans and other living things is the matter of life and death. Plants not only feeds us, however, but also has a significant role to breathe and stay alive. In the contemporary beautiful wall painting, the importance of plants is well described through astonishing colors and masterstrokes by the painter Fiaz. Moreover, there are the messages of generosity for others that are well explained, and its’ depiction through spreading flowers. 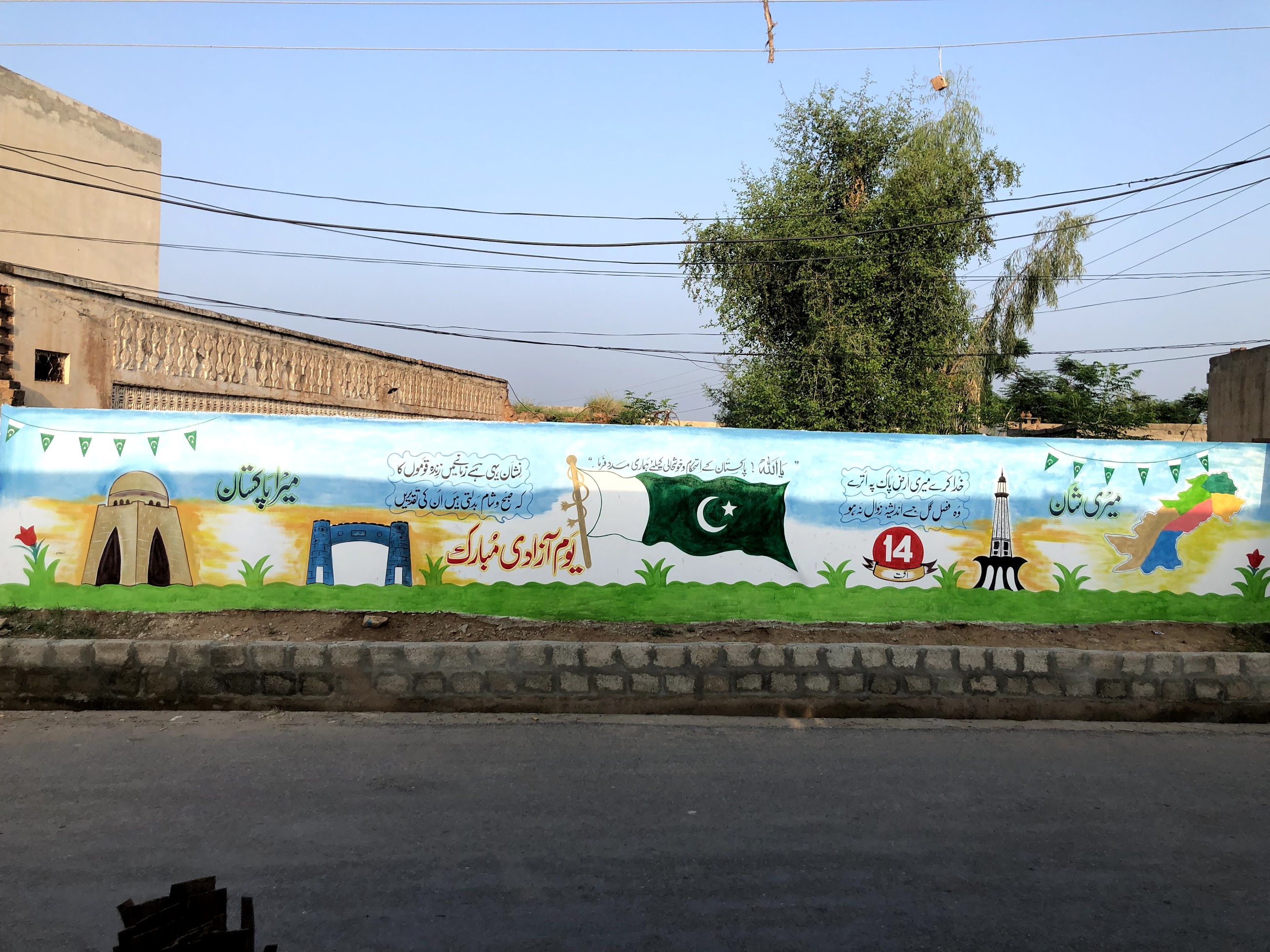 42. “MERI SHAAN, MERA PAKISTAN”
The foundation of the Islamic Republic of Pakistan is on the principles of Islamic values. It’s the land of people from different cultures, religions, ethnicity, traditions, and ideologies however, all lives as one nation for the better future of the homeland, Pakistan. In the current wall painting, different features of Pakistan are been highlighted. The tomb of the founding father, Mr. Muhammad Ali Jinnah presents the role and importance of people of Sindh in the entire struggle for freedom of Pakistan. The famous Bab-e-Khyber reflects the significant role of brave Pakhtoons that cannot be denied or forgotten in the freedom movement for Pakistan. The famous and symbolic Minar-e-Pakistan gives us goosebumps and memorizes us the great resolution of Pakistan that had been passed at the exact location was the symbolic Minar-e-Pakistan is standing today. In this beautiful wall painting, the flag of Pakistan and the map shows the nationalism and unity of the nation. Moreover, beautiful quotes are for the encouragement of patriotism in the youth of Pakistan.